by Egrets on Ergot 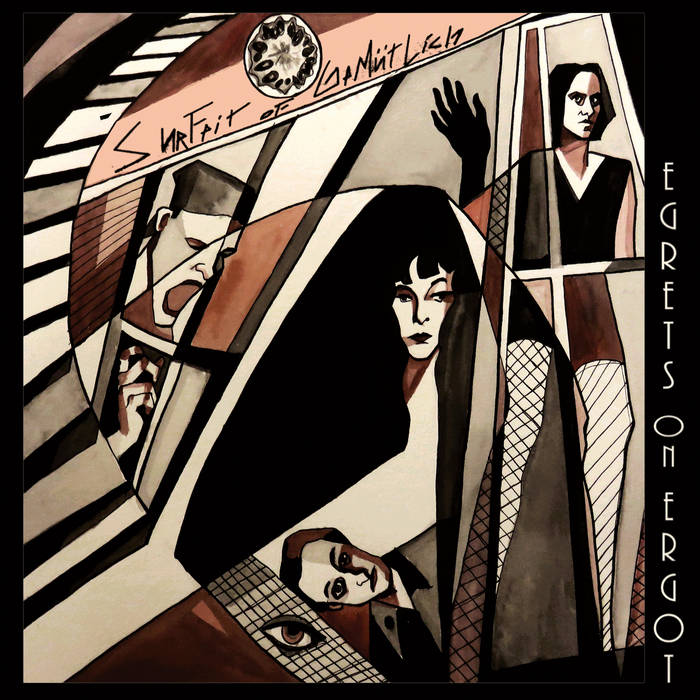 I first discovered this band in 2015. I was DJing at a Punk Festival in San Francisco celebrating 40 years of Punk. One of the nights my eye was captured by a performer in The Deadbeats called Nurse Heather. To me the vision of the Rock n Roll nurse from The New York Dolls song Pills. I later found out she was a guitarist in a band called the Egrets on Ergot.
Having my own radio show at the time and always looking for new sounds I decided to investigate this band. Much to my delight the band sent me a copy of their first EP Serve Us Tender which I placed as my number 1 release that year ( even though it had come out late 2014 )

I have been eagerly awaiting the next offering by this band since.

I am happy to hear in this record another glorious triumph of Art-Punk/Art-Rock.

Nothing on this album is top 40 radio friendly. There are no friendly pop tones or sounds here.

This band is literally a riot taking place on musical theory and the machine of pop music. If those are the things you are looking for then steer clear. This is not the band for you. Safe guard your fragile tender ears and run away now. If you are looking for outsider, dark, disturbing, or sinister sounds then this might be the band to fill that need.
Their sound reminds of echos of The Pop Group, Oingo Boingo, 60s psychedelic surf, and a touch of early English Goth ( Deathrock to my SF friends. )

The first track Mangkukulam sets the mood with a science classroom audio of a film on Ergot. A poison that can also cause hallucinations. That tells you right there you are indeed about to experience audio induced ones from here on through the rest of the album.

The second track Sister, Please has been released with a video worth viewing with some questionable content. You definitely want to view it.

The album is full of surprises and twists and turns.
Adam’s vocals remind me of Danny Elfman in far distant times. Much more sinister and direct though in his delivery.
A passionate vocalist and performer. He reaches into your head and rings out your brain.
His sax playing also reminds me of Boingo. I also hear echos of bebop Jazz there too. Possibly channeling the “Bird” at times.

Heather is amazing at the sounds she is able to get out of her guitar. Reminiscent of Daniel Ash and also of the 60s psyche sound too. Her vocals are a rock siren’s call to your ears.

Matt and Daniel challenge you with their sense of time and rhythm. Almost experimental jazz like at times. They take the song apart and let Adam and Heather roam and then bring the songs back together.

Production, of this must be challenging group, is first rate and Paul Roessler is also credited at times as the band’s keyboardist.

For those that are searching for something different and definitely challenging I can not recommend this album enough.

This album truly is Art Rock of this era of music.

A cacophony of sound and noise. An album I look forward to having many rotations on my turntable in the future. I can not see it becoming dated in anyway and that truly is the best compliment I can give any recording.

• The debut album from L.A.-based post-punk / death rock architects whose passionate performances and confrontational stage show have made them one of the biggest buzzes in L.A.'s venerable Echo Park scene!

All songs written by Egrets on Ergot

"These days, much of what passes for modern goth and post-punk music can come off as little more than harmless nostalgia for the ancient early ’80s, but Egrets on Ergot have somehow succeeded in making it all sound genuinely disturbing and aggressively unsettling again. " -LA Weekly ... more

Bandcamp Daily  your guide to the world of Bandcamp